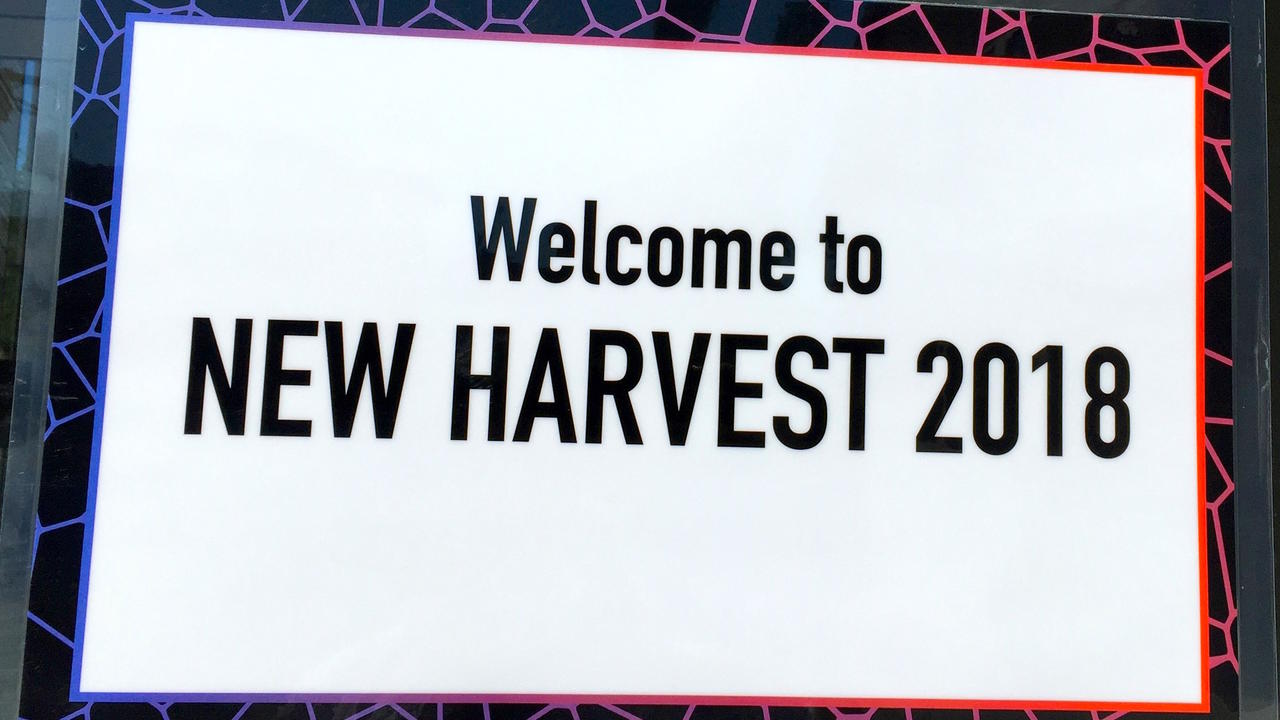 New Harvest’s third annual conference took place in Cambridge, Massachusetts at the MIT Media Labs from July 20th to July 21st. And it was an incredible time! From new and exciting startups to fascinating researchers in the field, the conference was a great way for players and companies in the field to come together. The presentations also provided detailed insights on a range of topics from regulatory overviews to insights by industry veterans.

Through all the presentations and discussions, there were three main themes that really stuck out to me.

1. The Field is Growing Quickly

Walking around the New Harvest Conference, one thing was visibly clear: cell ag is growing with new startups entering the field left and right. While some focused on building bioreactors, other startups were working on sustainable pet food supplements or building materials (like a sofa!) from mushroom mycelium. The majority of the new startups are working to produce cultured meat from cell cultures. From Higher Steaks and Kiran Meats to New Age Meats and Seafuture Sustainable Biotech, it’s incredible how many new startups were showcasing how they’re going to make eating meat more sustainable. 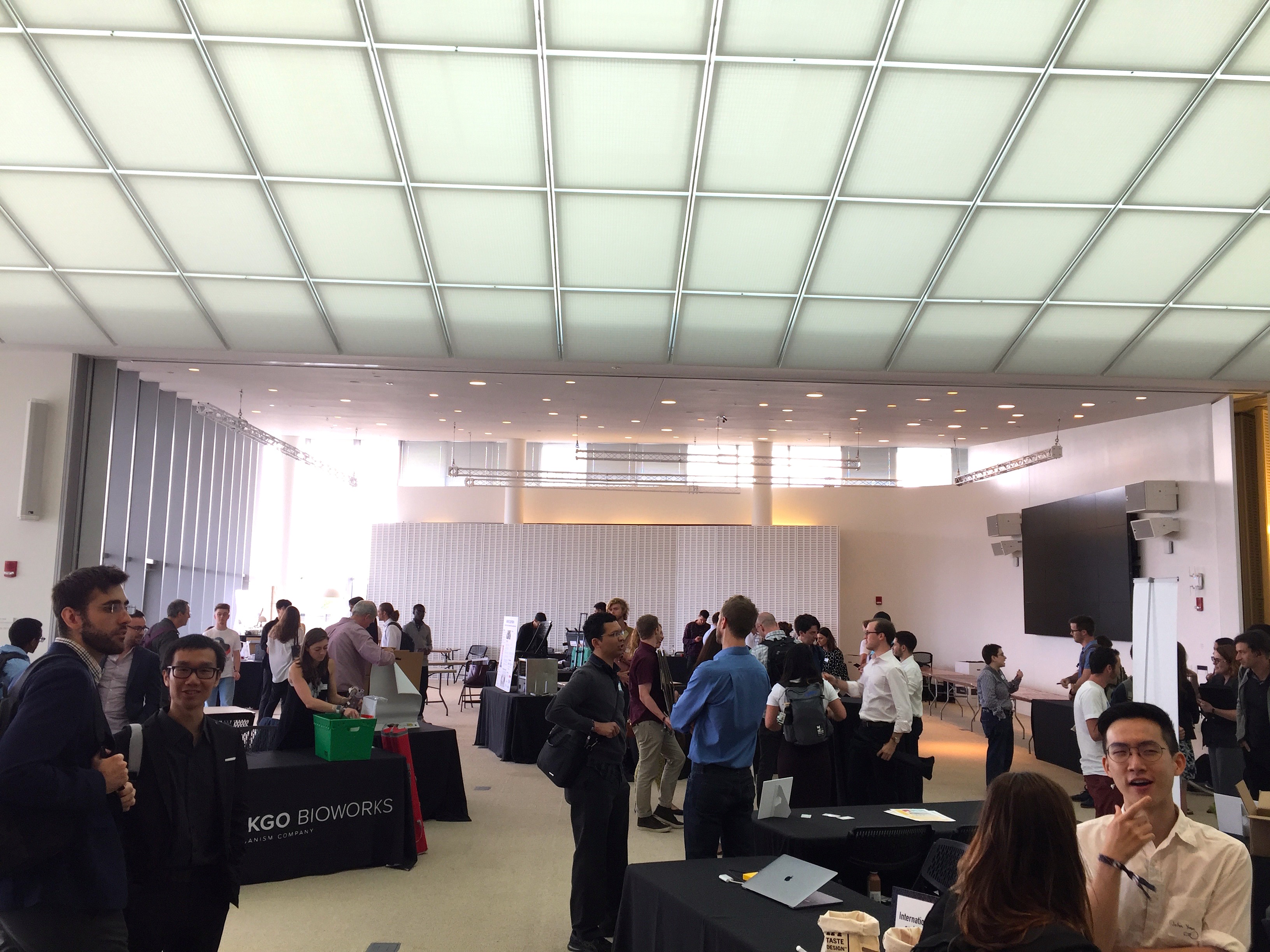 We need more and more startups to emerge with unique specializations to help further grow the field. As more cell ag startups step up, the field will have more chances to rise and become the future of food.

Cellular agriculture is still a developing field. While there are some cell ag products already on the market, there is still some time before cultured meat becomes commercial. With so many new startups racing to develop cultured meat, does that mean they’re all competitors at this early stage?

A common theme throughout the conference was that we’re all in this together. Through the different presentations and panel discussions, all the speakers shared the idea that it is more important to be supportive and make sure that everyone helps each other out. 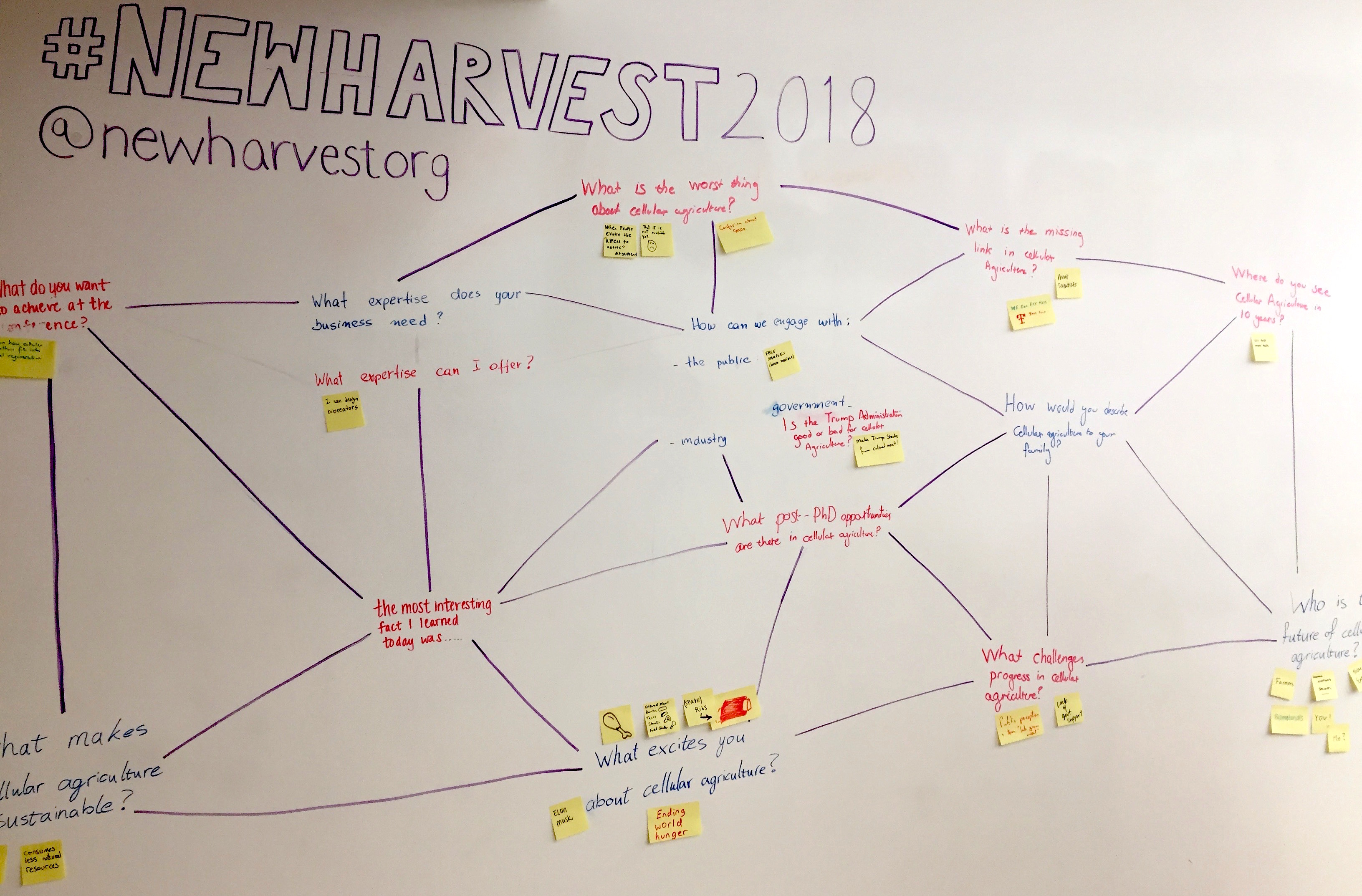 The speakers also reminded everyone why the field was needed. From environmental sustainability to eliminating antibiotic usage in animal agriculture, everyone in the field right now is here because they believe in the cause and that’s why they’re doing startups to reflect that.

This made sense. You can’t be competitors if there is no viable product to even compete with.

Collaboration over competition. It can literally create an entire field.

We live in an anti-GMO era.

GMO stands for genetically modified organism, and it involves the science of inserting the DNA of a gene of interest into the DNA sequence of another organism to produce proteins for a specific outcome. When GMOs first came out, it was an incredible technology full of potential. How did a technology that promised to sustainably produce all the food in the world suddenly become a word everyone is trying to avoid?

The answer goes back to the beginning. When Monsanto released the first GM plants, they didn’t bother to promote or educate the general public about their technology. Part of this had to do with early people in the field being scientists with little interest in marketing and communications. They were more interested in telling the public how they made GMOs.

No one tried to communicate why GMOs mattered or how their success could make food more sustainable. But that was exactly what was needed.

This was best illustrated by New Harvest speaker Ron Stotish. Stotish is the CEO of AquaBounty Technologies, the company behind the first genetically modified salmon. AquaBounty developed their genetically modified fish to grow faster and require less resources while producing more food. Besides sharing how they made their genetically modified fish to show its safety, the company did not explain why their product mattered to make eating fish more sustainable. As a result, a gap in public information existed and led to a public outcry against the company. That shaped government policy and regulation and, to this day, AquaBounty cannot sell their fish in the United States.

Stotish summarized the AquaBounty’s struggles for consumer acceptance in one all-important line: “In communicating [your product] to the greater community, the science is probably the easiest part.”

To avoid the same mistakes as GMOs, all the players in cellular agriculture will need to become better at telling the story why this field is needed. In a recent Good Food Institute survey, consumers were asked if they would try clean meat after being told the story why the product is being developed and the benefits of cell-grown meat. More than half said they were interested in trying it. It’s unlikely that this survey would have been as successful if the surveyed consumers were not told why this product and field mattered. 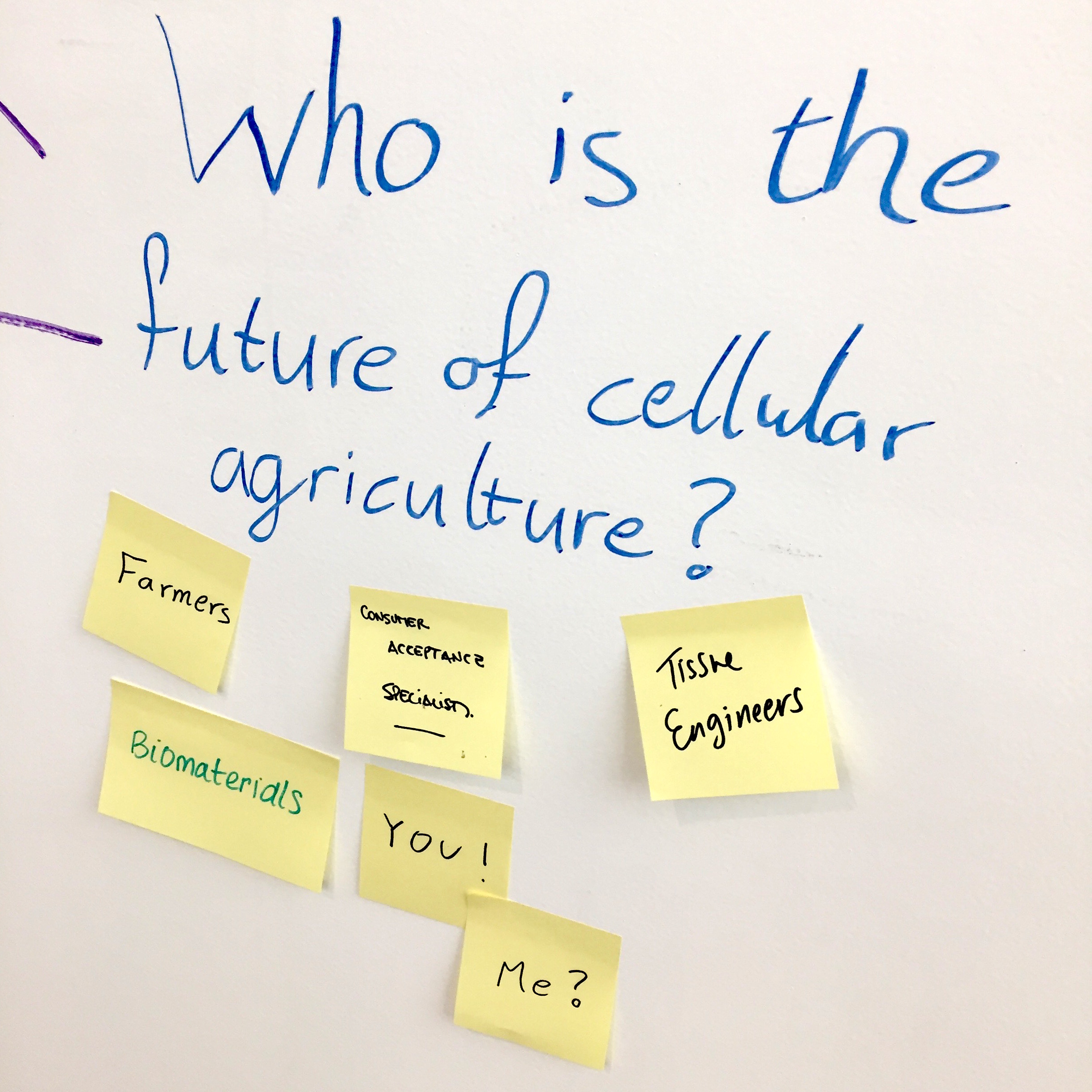 Who is the future of cellular agriculture?

Context is everything, and this novel field will need it. The story and the why matter just as much as the how.

As I was leaving the final presentation, I looked around. It was hard to believe. I was surrounded by people, researchers, and companies who have been in the field from the very beginning. And I had just spent the last two days meeting them. Everyone was very friendly and approachable, even for newer players in the field. As veterans in the field, they knew the importance of accepting new people to further grow the field. 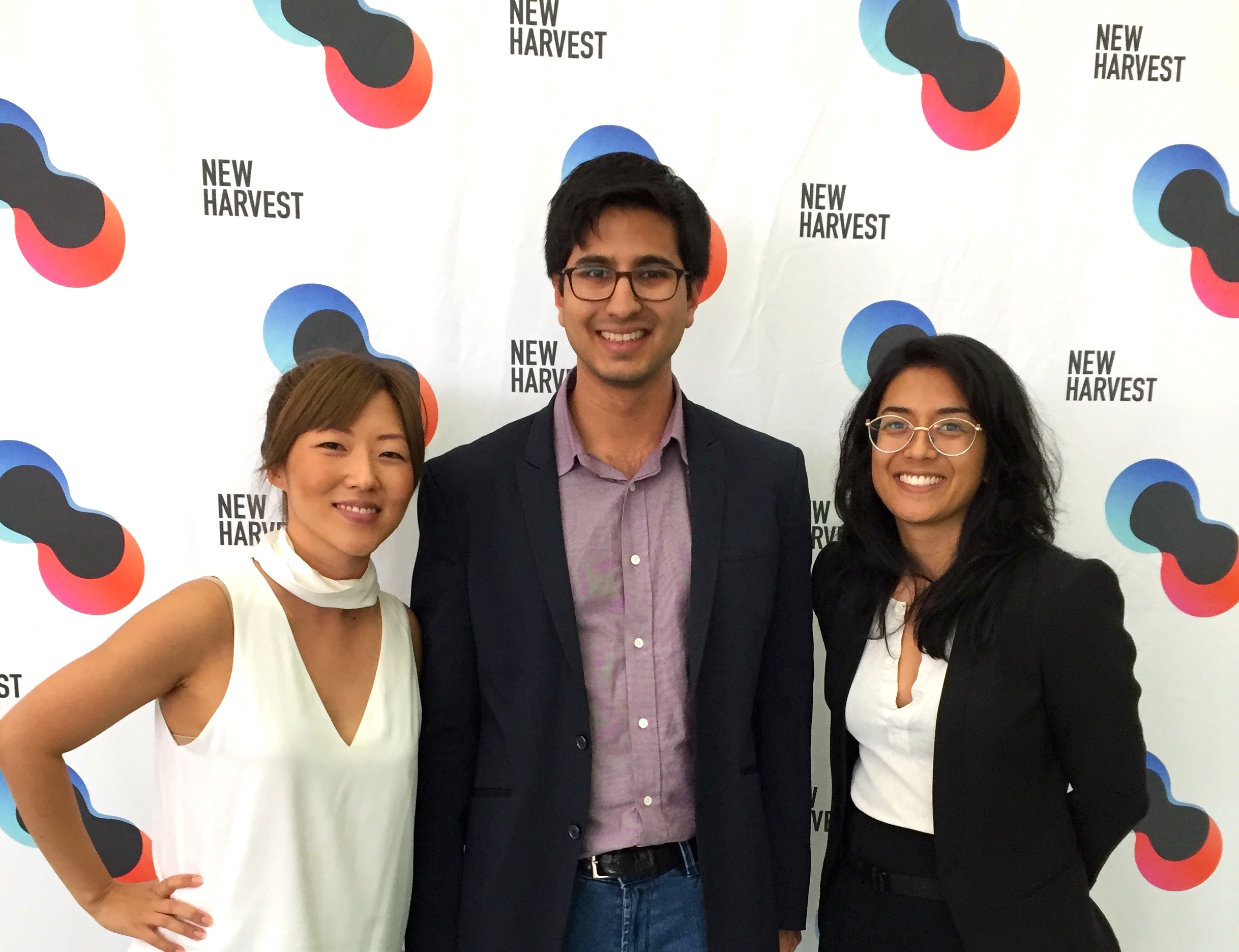 With Erin Kim and Isha Datar of New Harvest. Thank you to the entire New Harvest team for organizing an incredible conference!

On the elevator down, I spoke with someone who has been attending the New Harvest Conferences from the very beginning. Compared to the last conference, I was told that the tone of #NewHarvest2018 was different. Instead of being more theoretical and upbeat about the field’s potential, this conference was more realistic. With discussions about the importance (and struggles) of regulation and parallels with other industries, there seemed to be a more grounded perspective this year. And that’s one of the most positive signs for the field.

It shows that, in one year, cellular agriculture has grown from a theory to the lab.

Cellular agriculture is no longer an idea.

It can be done. It can become the future of food.